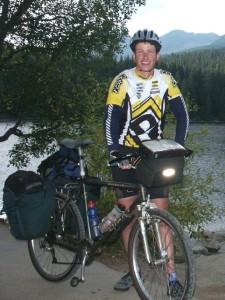 This website is dedicated to the memory of Dr. David T. Ryan, a world-class physicist, scholar and athlete. His life was abruptly and tragically ended at age 32 while he was doing what he loved best. On the evening of June 29th, 2004, he was struck down in his prime by a grossly speeding and out of control motor vehicle in Clifton Park, NY, while on his regular 30-mile training ride. Over time, the driver pleaded guilty to criminally negligent homicide.

To those who knew him, however briefly or deeply, David was the epitome of honor, decency and humbleness. And his dry wit was simply brilliant. Owing to his quiet nature, few realized that he also was unusually gifted as i) an academic (he graduated top of his class in Physics at Oxford University); ii) a corporate scientist (just a couple weeks before the tragedy, he landed the General Electric Company a multimillion dollar federal grant to develop a new generation of more diverse magnetic resonance imaging (MRI) instruments), and iii) a supremely tough and dedicated athlete, whose passion for mountain hiking, downhill skiing, and running was only surpassed by his love of cycling — he had logged well over 100,000 fast miles on the roads of two continents.

Born in Harrogate, North Yorkshire, England, David had spent the last three years of his life in the United States. For this, the lucky few in America who met him are most grateful, as they experienced his exemplary pursuit of excellence and enjoyed his friendship.

A fine and giving (albeit short) life such as David’s should never be forgotten, but rather meaningfully honored. As friends who shared some of our very best moments of the young millennium with him, we hope that David’s legacy will inspire others in varied ways, and that some general good might continue to come from his senseless loss.

Thank you for logging on to David’s site – Walt Cicha, Ph.D. and Bob Preville.