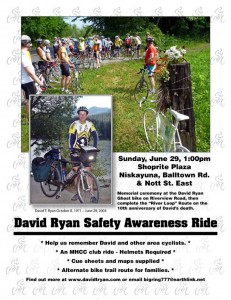 Area cyclists will pay tribute to David Ryan, a GRC physicist who was killed while riding his bike on June 29, 2004, during the David Ryan Safety Awareness Ride on Sunday, June 29.

The ride is also a fundraiser for the David RT. Ryan Scholarship fund at RPI. The ride itself is open to all and is free.

Riders will depart at 1 pm from the Shoprite Plaza parking lot at Balltown Road and Nott St. East in Niskayuna. Riders should arrive 15-30 minutes before the departure time.

Riders will have a police escort on neighborhood streets, connect with the Mohawk Hudson bike trail, then cross the Rexford bridge as a group and ride to the site of the David Ryan Ghost Bike memorial on River Road just east of Sugar Hill Road.

A short ceremony will take place at approximately 1:45 pm. Riders will then complete the river loop route at their own pace.

I know it’s early but I have been in touch with the team that organized the Dave Ryan Annual Memorial ride last year. In planning for next year, which will be the 10th anniversary of Dave’s accident, it has been decided to hold the ride on Sunday, June 29th which is the actual date.

Please spread the news and mark your calendars now. More details to follow as they become available. Thank you all SO much for you hard work in helping keep Dave firmly fixed in our memories.

There are no events to show.